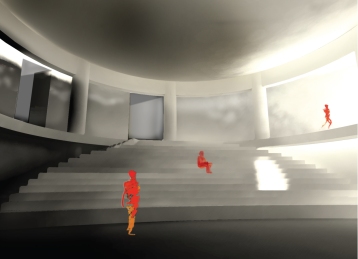 The project is developed with a three-fold goal: to commemorate the siege of Sarajevo (1992-1996), to offer space for culture and to preserve the existing public park, Hastahana. To do this, architecture and landscape work together. The main body of the design is placed beneath the park and conceptualized as underground passageways. These are experiential spaces that accentuate the duality of the concept: a public life in the open space and a traumatic memory beneath. A prominent pedestrian road that runs through the park leads to the underground art gallery and the memorial museum.

Once inside the building, a visitor is gradually led towards the central amphitheater, recognizable by its reversed dome. From here, three gates lead to spaces that are different both in their thematic and architectural solutions. These are: Memorial Hall, Library and the Museum. In the Memorial Hall, an acoustically interactive space, to each name of a victim of the siege of Sarajevo a perforated tube is assigned. These act as interactive elements as they reverberate sounds produced by visitors. Along the hall, niches are interpolated in order to provide possibility for seclusion and intimate contemplation. In the Library pavilion, dominant material is the ‘burned’ wood (Japanese shou sugi ban technique) as a reference to the act of burning Sarajevo’s National library in 1992. The pavilion is dedicated to the tragedy of the destruction of culture but also to the resilience of human will through creative production.

The visitor is free to organize his or her visit. Transitional hallways are connecting all the pavilions and they create space that allows time to contemplate before continuing the visit. The park and the streaming water above can be seen from the underground spaces, but remain unreachable except in the Memorial Garden – the final sequence of the Memorial Hall where victims of the siege are commemorated. Here one enters an enclosed garden with a single tree.